Many of our clients at COCO Enterprises (and about 13% of the US population) are at or near retirement age, making Social Security a major aspect of their lives.  So when Congress gears up for a political fight over the future of the program, you’d think it would make headlines.  But that’s exactly what isn’t happening right now, as a major Social Security trust fund is set to run out of funds late next year.

Let’s start with the basics of what we think of when you hear “Social Security”.  Social Security, or OASDI (which stands for Old-Age, Survivors, and Disability Insurance) isn’t just a paycheck in old age or for disability.  The Social Security Administration oversees six major government programs: OASDI, Temporary Assistance for Needy Families (TANF), Medicare, Medicaid, State Children’s Health Insurance Program (SCHIP), and Supplemental Security Income (SSI).  Each of these programs are funded in different ways.  For example, TANF is funded via Federal block grants to the states, who then operate their own, state-level programs with the funds.

The two programs that are making waves today, though, are both under OASDI.  OASDI is comprised of two separate programs: Retirement Insurance Benefits (RIB) and Social Security Disability Insurance (SSDI).  Both RIB and SSDI are technically funded by two separate trust funds held under the larger Social Security Trust Fund.  There are two separate trust funds simply because the two parts of Social Security were established at different times, about 20 years apart (SSDI is younger).  The overall Social Security Trust Fund balance currently stands at about $2.75 trillion, with only about $60 billion of that in the SSDI trust fund (as of 2014).  The SSDI fund is depleting at around $30 billion per year, leaving it empty by late 2016.

Traditionally, the Social Security Administration, as well as Congress, have treated the RIB and SSDI trust funds as one and the same.  However, since SSDI was created in 1957 as a new program, the two trust funds are technically distinct entities.  In spite of this of this, Congress has generally granted the Social Security Administration permission to move money between the two funds to cover short-term cash-shortages.  In fact, money has been transferred from one trust fund to another eleven times in the past, with money from the RIB fund transferred to the SSDI to cover program shortfalls ten times, and once from the SSDI to the RIB.

SSDI participation tends to swell in times of economic downturn.  Generally, there are two reasons behind this.  First, there are some workers who might qualify for SSDI but prefer to keep working, but then they enroll in SSDI after losing their jobs.  The second reason is fraud; people simply lie or commit fraud in order to obtain disability benefits.   Since the 2008 Financial Crisis and Great Recession of a few years ago, SSDI enrollment has, predictably, swelled.  This has resulted in beneficiaries of SSDI growing by 23%, leaving the SSDI trust fund projected to be fully depleted in late 2016 unless Congress acts.

The 2014 midterm elections saw the Republican Party strengthen their hold on the House of Representatives and take control of the Senate, but unlike past Congresses, the 114th Congress (the current one) has decided not to merely patch the hole in SSDI with funds from RIB.  In fact, the first day the 114th Congress was in session, the US House approved a new rule (called a ‘Point of Order”) that bars legislation from taking money from the RIB trust fund and moving it to the SSDI trust fund unless doing so fixes the program on a permanent, actuarially sound, basis.

That means that without an infusion of cash from the RIB trust fund, an increase in tax revenue, or some other legislative fix, the Social Security Administration is set to automatically cut benefits to all SSDI recipients by 21% in late 2016.

Republicans argue that taking money from the RIB trust fund to replenish the SSDI trust fund amounts to “robbing Peter to pay Paul”, and that moving funds from one trust fund to another doesn’t address the actual funding problem long-term.  Democrats counter that the distinction between the two funds is a legal technicality being exploited by Republicans for political purposes, all while threatening SSDI recipients with benefit cuts as ransom to change the program in ways the GOP would prefer.

As of now, the Republican leadership in the House has not offered up any legislation that would address the issue in the current Congressional term, though it is very early in the Congressional term.  The Social Security Subcommittee of the US House of Representatives Committee on Ways and Means, chaired by Rep. Paul Ryan (R-WI), is responsible for hearings and drafting legislation related to Social Security.  The Committee convened for the first time on January 21, where the Committee set the rules and oversight plan for the current Congress.  While it’s almost certain Ways and Means will deal with Social Security this term (and probably this year), no agenda or timetable has yet been set, and thus there is no proposed legislation as of this writing.

But that doesn’t mean that ideas aren’t already being floated in both the public and in the halls of government.  Democrats would see RIB funds moved into the SSDI trust account as a short-term measure, with long-term fixes usually including raising taxes and either raising or eliminating the ceiling on annual wages subject to Social Security taxes ($118,500 in 2015).  Because the House of Representatives is controlled by Republicans, none of these proposals are likely to be sent to the Senate, much less the President, over the next couple of years.  It’s far more likely that we’ll see GOP proposals, which include tightening the eligibility requirements for SSDI enrollment and/or reducing benefits, ending up on President Obama’s desk, where they will almost certainly be vetoed.

While it’s still uncertain what, if any, proposals will be presented in Congress this year, one thing is certain:  without further action by Congress, SSDI benefits will automatically be cut by 21% in late 2016, bringing SSDI in line with future projected revenues and expenses, effectively balancing the program’s budget by default.

The SSDI program isn’t the only trust fund that’s at risk of running dry. According to the Social Security Administration’s own audits, the RIB fund will be exhausted in (or around) 2033, which would result in an automatic benefits cut of 27% across the board in the RIB program based on projected revenues and expenses.  Like SSDI, simply doing nothing will result in the program automatically balancing its own budget by reducing benefits. But in the case of the RIB fund, there won’t be a larger trust fund to siphon funds from to cover the shortfall like SSDI has done over the years.  At that point, short-term fixes won’t be available anymore.

Politically, the most popular fix is simply raising the Social Security tax.  According to the Congressional Budget Office, raising the Social Security tax from 6.2% to 7.6% for all workers (and to 9.0% for those self-employed) would eliminate all projected shortfalls in both the RIB and SSDI trust funds for 75 years (which is as far out as they calculate).  This solution is supported by around 60% of Americans in poll after poll, and is by far the most politically popular solution of all proposals.

However, this is not necessarily the best policy decision.  Raising taxes nearly always creates market distortions.  After all, every dollar taxed away from workers is one less dollar they can spend on goods and services, deposit into banks, or invest.  I encourage you to read my December post on market distortions to understand why, more often than not, a “small tax increase” can have big (and usually negative) effects on an economy.

Perhaps the most likely political outcome of this latest fight over Social Security is that as the 2016 Presidential election approaches, a “short-term fix” will be applied that moves a small amount of money from the RIB fund to the SSDI fund.  But, those funds would be limited and would likely only last long enough to ensure that a Republican President, should one be elected, would be able to sign a more conservative-friendly reform of SSDI into law.  However, if a Democrat is elected and the GOP still controls Congress, we’ll be right back where we are now.  This is, of course, all speculation.  What isn’t speculation, though, is that Social Security will be in the news, especially as late 2016 approaches.

Back to COCO Enterprises 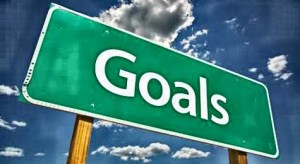 “If you don’t know where you are going, every road will get you nowhere.”
— Henry Kissinger.

The arrival of a New Year provides inspiration for setting resolutions and goals.  I was enjoying a New Year’s party at a friend’s home, and I was chatting with another friend Greg who stated how much he enjoys the coming of a new year.  For him, it was a time of “out with the old, and in with the new.”  I usually don’t give much thought to New Year’s, but Greg’s passion interested me.  As a result, I have decided to use Greg’s enthusiasm to ensure our readers have an opportunity to get the most out of 2015.

Goals help us identify what success looks like.  Unfortunately, many of us develop “normative” goals in our minds rather than descriptive goals that we write down on paper.  Normative goals are conceptual, difficult to measure, and highly subjective.

Here is an example of a normative goal: “I should read more good books this year.”  How much is more?  What is a good book?  Normative goals aren’t particularly inspiring because they are so ambiguous it is hard to find a starting point or an ending point that signals success has been achieved.  A descriptive goal, on the other hand, is measurable and achievable: “I am going to read at least one book per month.  I will read each book for 30 minutes every day before I get on Facebook, and I will track my daily progress on Evernote.”

Setting and achieving goals help us grow Spiritually, Physically, Relationally, Intellectually, and Financially.  At Coco Enterprises, we believe incorporating spiritual, physical, relational, and intellectual goals can help you achieve a life of the greatest human flourishing without the fear of regret.  If you are lacking goals for the New Year, consider a few options based on our S.P.R.I.F model:

• Commit to reading the Bible each day for 15 minutes
• Volunteer at your place of worship at least 3 times each quarter
• Attend a small group or Bible study each week
• Pray daily – for those you love, and those who frustrate you
• Practice forgiveness and become a master of it

• Walk or ride a bike to close destinations instead of driving
• Sleep 8 hours a day
• Ditch the soda and drink 32 ounces of water each day (use a filter for taste if you prefer)
• Stretch frequently throughout the day, each and every day
• Shovel snow when the snow blower is overkill

• Commit to talking with your spouse or partner for 1 hour each day, uninterrupted
• Send thank you cards when you feel grateful
• Catch up with friends you haven’t seen in awhile – call, email, visit
• Mend that broken relationship, because life is too short not to
• Set an example at work – rise above the negative tactics of others

By setting goals, you can achieve great things and develop good habits.  What other goals can you add to our S.P.R.I.F. list?  Share with us, we would love to hear from you.